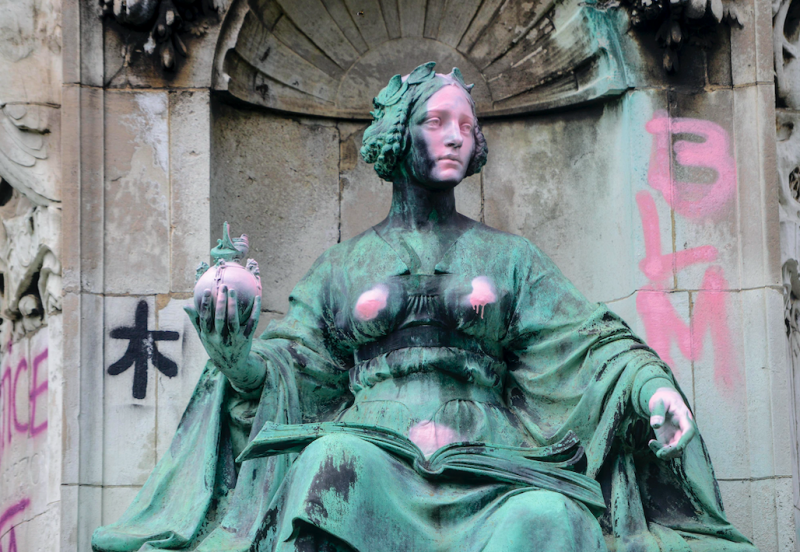 Calls To Purge Symbols Of Slavery On Streets, Schools & More

What’s in a name? U.S. towns see racism through symbols of slavery in streets, schools and more.

Protests over racial inequality have spurred a new reckoning over Confederate monuments and symbols, with calls for U.S. schools, streets and counties to be renamed and statues felled. The debate over Confederate monuments was thrust into the spotlight three years ago when white nationalists and neo-Nazis gathered in Charlottesville, Virginia to defend two statues of Confederate generals that the city had decided to take down.

Hundreds of U.S. towns have monuments to figures such as Robert E. Lee and Stonewall Jackson, who led the pro-slavery Confederate army in the 1861-1865 Civil War. Advocates for removal say they represent institutionalised racism and white supremacy, while defenders say they are a part of Southern heritage and caution against erasing all history. But even more common than the statues are buildings and boulevards named after the former Southern heroes, many of which exist in places where the population is now majority black.

“Forcing children to go to a school named after someone who fought to dehumanise them… is wrong,” said Lecia Brooks, a spokeswoman for the Southern Poverty Law Center (SPLC), a civil rights organisation in Montgomery, Alabama. “Now that people are beginning to understand what is meant by systemic racism and white supremacy, they’re beginning to make the connection,” she told the Thomson Reuters Foundation.

The head of a statue of Christopher Columbus was pulled off overnight amid protests against racial inequality in the aftermath of the death in Minneapolis police custody of George Floyd in Boston, Massachusetts, U.S., June 10, 2020. REUTERS/Brian Snyder

SPLC documented nearly 1,800 public symbols of the Confederacy in a 2019 report, including 103 schools, 80 counties and cities, and nine state holidays. Some have already been taken down and the protests – sparked by the death of George Floyd, an unarmed black man at the hands of a white police officer  – will likely speed the process, said Brooks. Although some states have laws against removing monuments, changing street or school names is easier, she said.

In Virginia, a student-led petition to change the name and mascot of Lee-Davis High School, named after Robert E. Lee and Jefferson Davis, garnered over 15,000 signatures in less than a week. Its sports teams are called “the Confederates”. “I’ve been watching the Black Lives Matter movement grow… and I kept on being reminded of my school and the name and how embarrassing and racist it is,” said Sophie Lynn, the 16-year-old who started the petition. “This is not the first time this has been brought up, but I thought we might as well try it again,” she said. The Hanover County school board voted against a name change when it was raised in 2018, and has not yet responded to the new petition.

Protests over racial inequality have gone global since the death on May 25 of George Floyd in Minneapolis. Outrage over monuments followed, with protesters pulling down a statue of a slave trader in the English city of Bristol and setting alight a statue of Belgian colonialist King Leopold II in Antwerp.

In the United States, the calls extended beyond Confederate symbols. One online petition called for changing all the names of streets and places named after slave owners in New York City, such as Madison Avenue and Washington Square. “Names have a profound psychological impact on us, and their continued existence is a part of the infrastructure that upholds white supremacy,” wrote journalist Joe Penney, who started the petition.

U.S. President Donald Trump has previously criticised the removal of Confederate statues by saying that it could lead to the removal of monuments of George Washington and Thomas Jefferson, the nation’s founding fathers who also owned slaves. “You really do have to ask yourself, where does it stop?” Trump said in 2017.

Historian James Grossman said Confederate names should be changed and statues of Confederate generals moved to museums, but that this should not extend to anyone who owned slaves. “A statue of Jefferson is a monument to the principles of the declaration of independence, although Jefferson was a flawed hero. A monument to Stonewall Jackson or Robert E. Lee is a monument to the cause of the confederacy,” said Grossman, executive director of the American Historical Association. “What matters is what are you commemorating. When you put up a statue, you’re saying these are the values of our community,” he said.