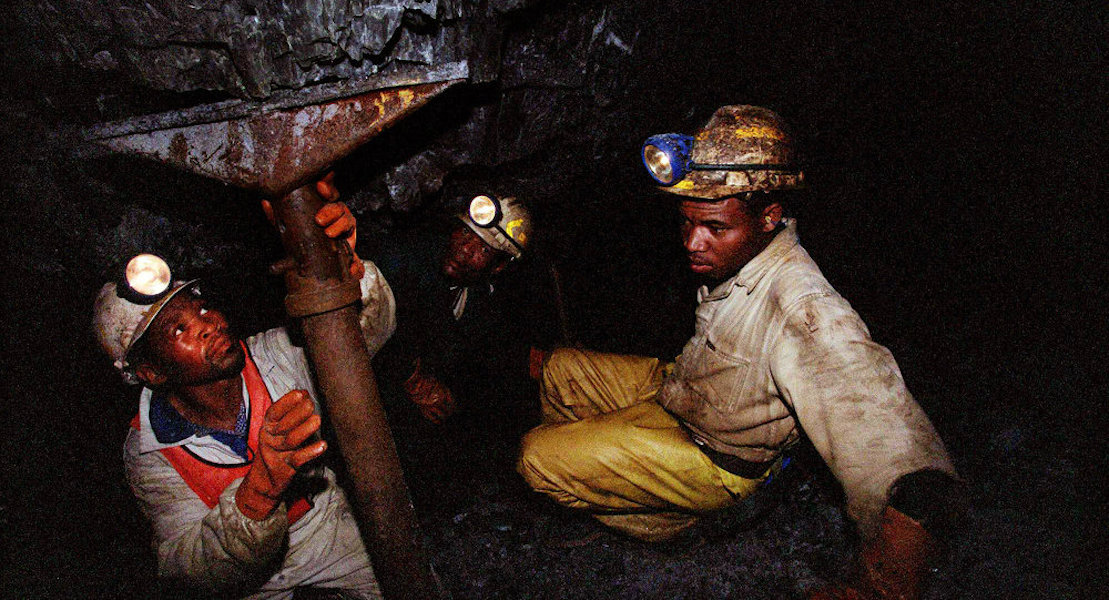 South African miners fight hunger during lockdown by dodging police and digging for gold below ground.

At least 100 illegal gold miners in South Africa are hiding underground, too scared to surface with police on patrol to enforce the coronavirus lockdown, according to industry sources. Many illegal miners, known as zama-zamas – a Zulu expression for “taking a chance” – were underground in abandoned or disused mines in Gauteng province when the lockdown began on March 27 2020.

Lawyers, activists and illegal miners told the Thomson Reuters Foundation that zama-zamas had little choice but to continue working, worried about being arrested if they surfaced and knowing there was no other work. “They are struggling to get to the surface (to buy food) as police are blocking the entrances and they fear arrest,” said Johannesburg gold miner Zach, whose name was changed to protect his identity. “At least 100 (zama-zamas) that I know of are trying to earn some money during the lockdown,” said Zach, 29, adding he had been arrested many times since turning to mining six years ago.

Illegal gold mining has plagued South Africa’s mining companies for decades, robbing the industry and state coffers of billions of rand through smalltime pilfering as well as networks run by organised crime. The Minerals Council South Africa estimates seven tonnes of gold – from total national production of about 135 tonnes – is lost each year to illegal mining, which is driven by the joblessness and economic hardship that prevail across the country.

Thousands of zama-zamas are thought to be operating at any one time, many of them undocumented immigrants from neighbouring countries who provided migrant labour for South Africa’s mines in the past but were then laid off. Zama-zamas are now a permanent fixture of the shanties that ring Johannesburg and its satellite towns along the gold reef, and are blamed for outbreaks of violence, including underground shoot-outs between rival gangs.

Once the largest gold producer, South Africa now ranks about eighth globally with mining accounting for roughly 7% of GDP. The sector braced for a heavy hit when the government last month ordered most underground mines and furnaces to be put into care and maintenance due to the coronavirus. But after a lobbying campaign by miners, it said it would allow mines to operate at up to half capacity during the lockdown, recognising the chance of instability if deep-level mines closed for a long period.

Informal mining has continued nevertheless as it remains largely unrecognised by the government – just like many zama-zamas, who are unable to seek financial assistance, legal experts said.
Edwin Makwati, a lawyer from the Legal Resources Centre in Johannesburg said that “artisanal miners depend on mining to feed their families but they are categorised as criminals”. “Now they have to face the decision: do they die of hunger or risk arrest for violating the COVID-19 regulations?” he said in a phone interview.

Yvette, 32, a zama-zama from Soweto township whose name has also been changed, also believed there were still “at least 100 zama-zamas underground” in Gauteng province alone, sifting for gold in tunnels no longer maintained and at risk of collapse. “There are (abandoned) shafts throughout the country where there could be more,” she said.

A 2015 report by South Africa’s Human Rights Commission identified 221 open holes and disused shafts alone in Gauteng, which is the most populous of the country’s nine provinces. Some had been covered by the government, but zama-zamas would likely find other entrances into the mines, some of which run up to four km (2.5 miles) deep, the report said.

Police spokesman Brigadier Vish Naidoo acknowledged it was likely that some zama-zamas were underground, adding that “they stay underground for months, even before lockdown”. “A crime is a crime. There are no good zama-zamas,” he said in a phone interview. A spokesman for the South African Department of Mineral Resources and Energy said the ministry only kept records of mine workers from legal operations.

“Illegal mining … is fueled by highly organized dangerous, well-financed and complex local and international crime syndicates,” he added in emailed comments. Charmane Russell, spokeswoman for the Minerals Council South Africa, said that “illegal miners are not screened or protected in any way … and the gathering of people clearly does not comply with social distancing requirements.”

Scores of zama-zamas die each year in the labyrinth of tunnels that stretch beneath the streets of Johannesburg and beyond, although police and the government admit they have no idea of the precise toll. But Sindile, a female zama-zama from Soweto township who helps process gold above ground, said the money that could be earned made it worth the risk for many.

Artisanal mining can fetch Zach and Sindile up to 5,000 rand ($270) a month – more than the national minimum wage of roughly 3,600 rand ($195). “You know hunger?” said Sindile, a single mother of three, who also asked not to be identified. “It is not your friend. This is why we take chances.”

The zama-zamas said that the lockdown and increased police presence have added additional challenges to their already dangerous work. Reported cases of the coronavirus were close to 5,000 in South Africa and about 93 deaths, according to a tally by Johns Hopkins University. “But we are more afraid of the police than the virus,” said Yvette.

David Van Wyk, lead researcher at Bench Marks Foundation, a church-linked group that monitors corporate responsibility, said it was working on setting up co-operatives with informal miners. “The coronavirus pandemic is going to bring a lot more unemployment,” said Van Wyk, who predicted more South Africans desperate for work would take up illegal mining. “We may even see informal mines collapse. This is a scary time for zama-zamas, especially those currently underground.”

The World’s Slums Brace For The Impact Of Coronavirus