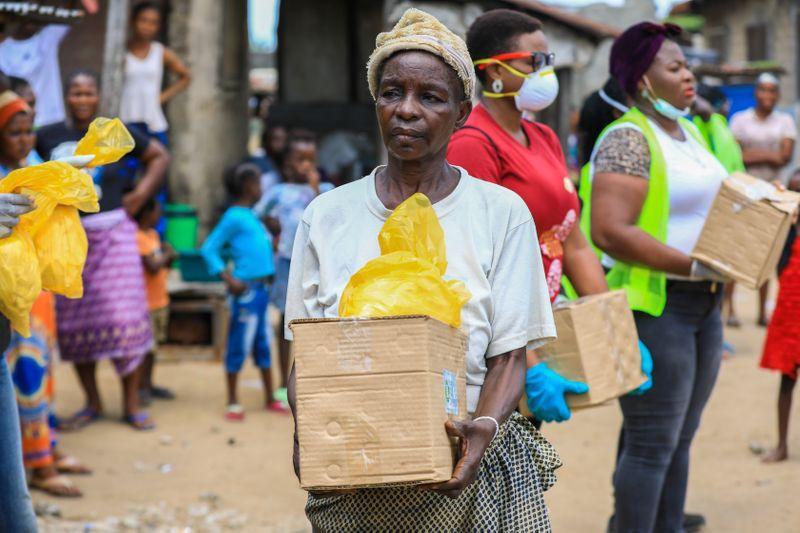 Shehu Isah Daiyanu Dumus has run out of cash and says he only has a few handfuls of cassava flour left to eat. The 53-year-old paraplegic man usually sells phone cards. However,  an extended lockdown to fight the new coronavirus in Nigeria’s biggest city, Lagos, has left him stranded and millions of Africans face hunger.

The Lagos state government sent him a text after the lockdown began on March 30 saying he would receive a food parcel. But no food came, and with government offices closed, he had no idea when or how he would get any.

“I am sure that if this coronavirus did not kill people with disability, definitely this order of stay at home will kill people,” he told Reuters outside a building near the airport where a friend is letting him stay.

Hunger and anger are building in Lagos and other major African cities with little or no social safety net to protect the poor from the economic fallout of the COVID-19 pandemic.

The World Food Programme says at least 20% of Africa’s 1.2 billion people are already undernourished – the highest percentage in the world. The combination of widespread poverty, reliance on imported food and price spikes due to the epidemic could prove deadly if African governments don’t act quickly, it says.

Under new restrictions in Nigeria, Kenya and South Africa, millions who once lived on daily wages are running out of food. Many work as traders, labourers or craftsmen in the informal sector, which accounts for 85% of employment across the continent, and must now stay home with no savings as a buffer.

In Lagos, three out of seven of its 20 million residents cannot always get enough food under normal circumstances, according to the Lagos Food Bank Initiative, a nonprofit. The 14-day lockdown, extended by another two weeks on Monday, has thrown millions more into need.

Food prices spiked as residents raced to stock up. Imported rice rose 11% and the price of garri, a staple made from cassava, nearly doubled, said Lagos-based risk consultancy SBM Intelligence.

Michael Sunbola, the food bank’s president, said his organisation was getting 50% more calls than usual from frantic residents. Some trek for five hours to collect food. As his team unloaded rice, beans, oil and cassava flour this month in Agboyi Ketu, he said many would struggle as the shutdown continues. “We are afraid some people might starve,” Sunbola said.

The Lagos state government is trying to help. It distributed 200,000 food packs during the first weeks of the lockdown and aims to give out 2 million as soon as possible, Agriculture Commissioner Gbolahan Lawal told Reuters.

The federal government has promised cash grants for the poorest Nigerians, and food vouchers. However, videos online show angry Lagos residents tearing apart what they consider paltry offerings. Lawal said those people did not understand that the aid was meant only for the most vulnerable. But officials acknowledge they are barely scratching the surface of the problem.

Mohammed Zanna, with the Nigerian Slum/Informal Settlement Federation, said desperate residents mobbed his truck when he tried to deliver food for the disabled on Monday in the run-down Agege neighbourhood.

Gangs of men armed with machetes, cutlasses and iron bars prowled the area as he sped away, dodging burning tyres. “It is a war zone,” he said, and the group can no longer distribute food in some neighbourhoods without police escorts. Police said they had deployed extra units to tackle the crime wave. Kenya has imposed a night curfew and forbidden most movement – apart from food – in and out of the capital, Nairobi, the country’s coronavirus epicentre.

On Sunday, hundreds of desperate residents in the city’s biggest slum, Kibera, stampeded during an aid distribution by opposition leader Raila Odinga. The next day, the government banned direct donations, insisting they go through government to prevent “unnecessary disorder”.

Kennedy Odede, whose charity Shining Hope for Communities works in Kibera, said the restrictions could cause more unrest. “Food is more important than corona,” he said. “The government must see how people are desperate – they will risk their life for food.”

In South Africa’s Gauteng province – which includes Johannesburg and Pretoria – the government is distributing food to 54,000 people deemed vulnerable due to a nationwide lockdown. But even before the restrictions, at least 16% of Gauteng’s 12 million people needed food aid, according to government estimates.

“The reality is that we underestimated the number of poor … (and) homeless people,” said Panyaza Lesufi of the Department for Social Development. Back in Lagos, Dumus managed to reach a state worker after Reuters gave him a flyer distributed by Lawal’s team. But he said he has yet to receive any government aid. He noted that the government is seeking private donations to fight COVID-19 as millions of Africans face hunger