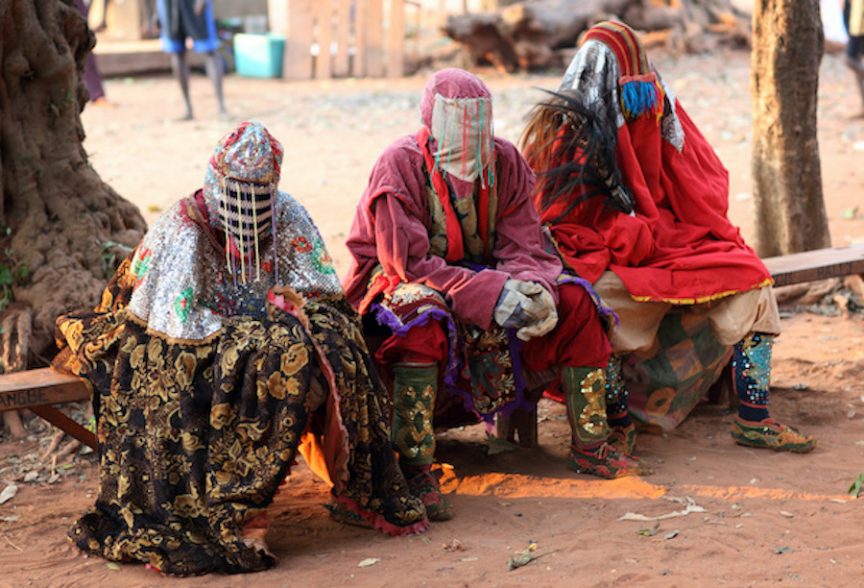 Officially the Togolese Republic, Togo is one of the smallest countries in Africa, bordered by Ghana to the west, Benin to the east and Burkina Faso to the north. During the slave trade by Europeans, from the 16th to 18th century, the coastal region was part of a major trading centre, earning the country and the surrounding region the name “The Slave Coast.”

Crossing the border from Ghana in the dark of night is not the best way to enter Togo. The main border at Aflao is no more than a tiny dirt road with a thick rope demarcating the line between the two countries. For the non-French speaker, a guide is highly recommended to take you through the process.

Voodoo Village of Ewe aka Gen people, Anfoin By homocosmicos

Once through, the sights and sounds delight as one travels through the capital city of Lomé:  the streets humming with motorbikes, children playing football and the constant roar of the surf from the Atlantic Ocean. In the centre lies the cosmopolitan Hotel Onomo filled with chicly attired millennials and families.

The action continues in the morning with the bustling Grand Marché marketplace where you will be surprised at the orderliness of the hectic pace of the vibrant and beautiful example of a real African market experience. Vastly different from the chaos of Kumasi’s miles-long market, the vendors hawk unique fabrics, mounds of salt, dried fish, butchered meats and baguettes.

The food in Togo is highly dependent upon the establishment. With its strong French influence, pastries, salads and complex dishes are present on some of the finer hotel menus, but it is not easy for the unadventurous or weary traveller to find great restaurants. You may want to take advantage of Lome’s supermarket that is very well stocked with various cheeses, meats and snacks.

A short drive from the Grand Marché is Akodessewa, the largest Fetish market in Western Africa. A place where Voodoo practitioners can find absolutely anything they need for their rituals, it is a jumble of bones from every animal imaginable, dolls and herbs. The majority of the vendors and priests originate from neighbouring Benin where the practice is the main religion. Every January, thousands of followers travel along the Slave Road in Ouidah, Benin to the beach where they worship and pay homage to the millions of slaves who traversed the very same road.

Journeying east from Lome takes you to Aneho, previously the colonial capital of Togo until 1920. A quick turn off the road before you hit the town, into Agbodrafo, is undoubtedly one of the most impactful, yet least known, historical sites – the Maison d’Esclaves or Slave House.

Also known as the Wood House, this now unassuming rundown house was built in 1835 by Scottish slave trader John Henry Wood. A small courtyard provides entrance to what appears to be a humble three-roomed house with a porch desperately in need of repair. Visitors soon discover that the openings in the porch are exits from the underground holding area. Slaves would be forced to spend up to three months lying in the dirt of the two-metre high cellar while the lives of their captors went on right above them. Now designated as a UNESCO site, it brings the horror of slavery to an even more intimate level than the better known Ghana’s Elmina and Cape Coast Castles.

The final must-see will take you into Aneho where you can hop on a pirogue to Togoville on the northeastern side of Lake Togo. Historically known as the country’s centre of voodoo it is where many of its practitioners were taken as slaves to Haiti. Ironically, there co-exists a grand Catholic Church with an official Pope John Paul II verified shrine that commemorates the appearance of the Virgin Mary and baby Jesus on Lake Togo in the late 1970s. Thousands of worshipers now perform a pilgrimage each year, singing and clapping as they peacefully glide across the lake, all day.

The everyday life of Togoville’s residents is quite fascinating, in a town which has very little grass with a film of red dust everywhere. The villagers function through a barter system in a predominately non-electric environment. Tree trunks are wrapped in black, red and white cloths for daily Vodoun rites; shrines, altars and icons abound.

The true experience of Togo is lost without a guide and well worth the expense. Despite its diminutive size, Togo holds as much history and culture as its larger neighbouring countries.