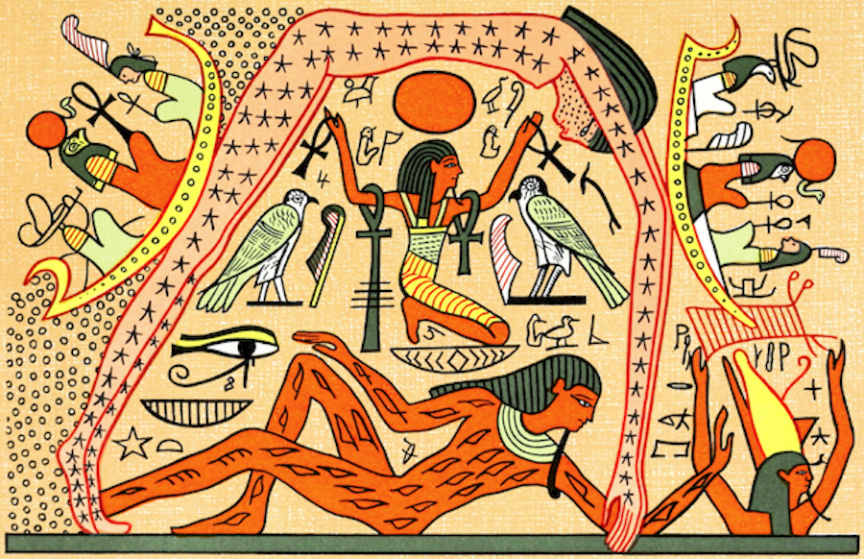 Take a deep breath for a new reality.  Lisa Bent reveals how, despite the general belief that Yoga originates from India, it was first practised by an ancient Black civilization.

Whether you have tried it or not, everyone has heard about Yoga. More than a buzzword, this practice is as accessible as your local news agent. The practise of yoga is commonly known to have originated in India, evidenced in sculptures and scriptures that date back to the 10th Century. However, research shows that it began in Africa, Kemet, which means “Black Land,” now known as Egypt in the 10th Millennium, that is, 10,000 years Before Christ.

The term is from Sanskrit India and means to “Yoke” or to “Link” individual consciousness with universal consciousness. The ancient Egyptian term is called “Sema” or “Smai” which means union. “Smai Tawi” or “Smai Taui” becomes the “union of the two lands” which translates to the merging of the lower self and higher self to “know thy self” and this signifies Egyptian Yoga. More than a form of exercise, it is a religion, a spiritual discipline leading to enlightenment and healing through the re-connection of mind and body to the original source, God.

The most ancient writings in our historical period are from ancient Egyptians, who were African people living in the Northeastern quadrant of the continent of Africa. We refer to these writings as Hieroglyphics, of which the ancient name is called Metu Neter, meaning the “Writing of God” or “Divine Speech,” which are inscribed in papyruses, temples, tombs, statues and obelisks. The symbols are more than a mythological record of life years ago, they are the first historical record of ancient Egyptian Religion and it is here that all of the major forms of Indian Yoga can be found. Bhagavad Gita, Mahabharata and Patanjali Yoga Sutras are usually cited as the original sources of yogic philosophy and teaching, but evidence shows this is incorrect.

One of the treasures discovered in Tutankhamun’s tomb by British archaeologist Howard Carter in 1922, was a carving on a chair of Shu, the male God of wind and air thought to represent the concept of breath.  The sun disk above his head represents the crown chakra which refers to higher states of consciousness and the two snakes on either side of him represent the channels in which energy flows through the body. Sitting in the Pose of Immortality, now known as Kneeling Twist on a platform that represents Nub, the ancient Egyptian word for gold, signifies the ultimate purpose of the practice of Yoga, to achieve the highest level of consciousness.

Another example of evidence is engraved on the ceiling of the Temple of Aset. Geb, God of the Earth is in plough pose. Framing him is Nut, goddess of the sky in a forward fold yoga pose. You will not look at Hieroglyphics in the same way again.

Research shows that yoga is part of Indian heritage due to the migration of this practice from Africa into India, where it was eventually adopted. There are five recognised disciplines of yoga; Wisdom, Devotional Love, Meditation and physical postures of yoga, Selfless Action and Serpent power otherwise known as Kundalini and Tantric yoga. Each branch of yoga has a different path and philosophy towards self-improvement and enlightenment.

In the 20th Century, Hatha Yoga was the most widely practised form of yoga in the UK and America. Time is spent on each pose as the focus is on stretching in order to reach the primary goal, to increase mental and spiritual awareness through physical health and balance. So how did it arrive here?

The United States immigration services placed restrictions on Indian immigration in 1924, which meant Westerners wanting to learn yogic teachings had to travel to the East. Pattabhi Jois created Ashtanga Vinyasa Yoga in 1948, which led to Power Yoga. The quota was lifted in 1965, which brought a new wave of Eastern teachers. B.K.S Iyengar created Iyengar Yoga, his book Light on Yoga (1966) is described as “The Bible of Modern Yoga” due to the description of 200 Yoga Asanas, or postures, illustrated with 600 photographs. This was the first type of yoga to arrive in the UK.

Public funded classes were taught from 1970 until the 1980’s when they became privatised due to Prime Minister Margaret Thatcher cutting funds. By the 1990s, the beginning of the yoga boom, studios began to appear in city centres.

Russia-born Eugenie Peterson changed her name to Indra Devi and taught yoga as a form of exercise, focusing on postures and breath control known as Pranayama, to Hollywood celebrities. Nicknamed “The First Lady of Yoga” she packaged it to women as a beauty secret. Other variations of Hatha Yoga within the 20th Century include Ashtanga, Viniyoga, Sivananda and Bikram Yoga that has spread across America, Europe and the rest of the world.

Bikram Choudhury, the founder of Bikram Yoga, a series of 26 fixed Yoga postures practised in a hot environment of 40 Celsius, caught the yoga wave. At the height of his success, he had approximately 650 franchised studios. From Calcutta, India he moved to Beverly Hills in the early 1970s and quickly built a celebrity-endorsed fitness empire. He has reportedly amassed a fortune of $75 million with a fleet of 43 luxury cars.  In the same timeline, Yirser Ra Hotep creator of the YogaSkills Method and the most senior instructor of Kemetic Yoga in the United States was involved with the original research and documentation of Kemetic Yoga (Egyptian Yoga) with master instructor Dr Asar Ha-pi. Through his YogaSkills School, he has trained and certified thousands of Kemet Yoga teachers.

The heat surrounding Bikram Yoga eventually moved to the man himself, as allegations surrounding Choudhury’s conduct and behaviour recently emerged. In 2011, Pandhora Williams sued him for racial discrimination after he kicked her off the course when she questioned his homophobic rant. He reportedly said, “Get that black bitch out of here. She’s a Cancer” and refused to refund her $10,000 training fee. Two years later, Sarah Baughn was the first former student to come forward with sexual assault and rape allegations. It shook the community, whilst paving the way for more women to feel brave enough to tell their stories. Six women accused Bikram of rape, whilst four cases were settled, they are yet to receive compensation and no criminal charges have been issued. He fled the country and continues to teach around the world.

Mark Singleton is a scholar of Yoga and Senior Research at SOAS, University of London. He acknowledges the radical break from the origins of Hatha Yoga and ancient tradition as the practice, now in the 21st Century, focuses more on physical strength. This tends to incorporate the fast-paced nature of aerobics combined with gymnastic poses. It, therefore, comes as no surprise that there has been a rise in related injuries. The British Medical Journal published a study, in 2018, citing a 64 per cent rise in injuries to the hip, hamstring and knee. The hard nature of the poses, coupled with, yes you have guessed it, looking good for Instagram are the main reasons. Is the practice becoming even more removed from its original purpose as a result?

Although yoga is often thought to have originated from India, the poster child is usually a slim, fit, Caucasian woman. The industry as a whole is not known to be as diverse or as welcoming as you would perhaps expect and there has been a wealth of discussion around this. In turn, a more diverse group of teachers are coming through and creating alternative spaces. Things change and evolve naturally over time, however, ancient yoga and its purpose is a system for living in unison and connection. The time for yoga to find itself again may have arrived.

Classes in the UK are open to everyone and maybe labelled as African, Afrikan, Kemetic (incorporates tongue connection as a way to move the energy through the body) or Egyptian Yoga, however, they all lie in the ancient tradition. The practice of physical movements relate to the elements: Earth (Geb), Water (Hapi), Air (Shu) and Fire (Ra or Re), they are fluid and combine the control of breath and rhythm and the movements work together in harmony.

Interested? SJ Martin, the founder of House of Highlife, teaches Smai Twai Yoga once a month at The Curtain, in Shoreditch. For non-members it’s £15, members can attend for free (houseofhighlife.com).

Amani Eke holds Melanin in Bloom on Thursdays in Peckham, South London at £12 per class. Friday classes in Nunhead, South London work on a sliding scale, where you pay what you can £14, £10 or £6. @melanin_in_bloom